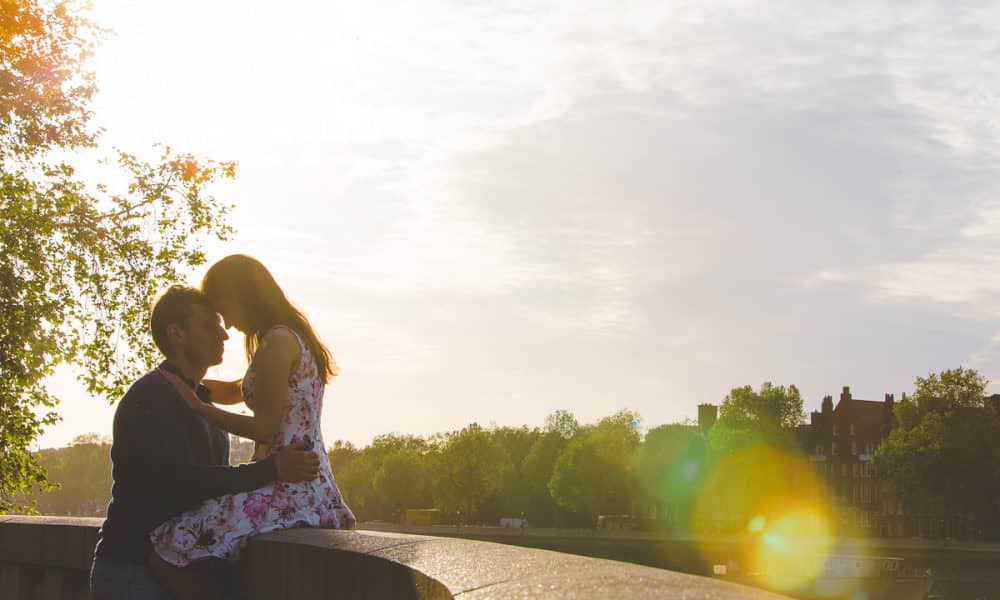 At Katy and Tim’s Battersea Park engagement shoot, I found out that Tim is a massive Leicester City FC fan….Some will remember 2016 as the year a research ship is named Boaty McBoatface and The Queen turned 90. The biggest news for Tim was that Leicester City won the 2016 Premier League in the greatest underdog story. Oh and of course he married his soulmate, Katy! 🙂 When I asked Tim about the first time he met Katy he very quickly said: “When you know, you know”!

As a London wedding photographer, I’m very lucky to have the greatest city in the world at my fingertips! Katy and Tim live in South London (the best side of the river, of course) so, a few weeks before their wedding, I met them at Battersea Park. Their beautiful and aptly named Affenpinscher, Loki (after the Norse God of mischief, not the Marvel Comics!) came too!

Battersea Park is not as well known as the other Royal Parks but offers so much variety to photograph. The River Thames, beautiful trees, pagodas and a bandstand, but sometimes it’s just about the quality of light. I’m constantly looking for the best light….and right by the public toilets we found some amazing golden light as the sun was setting! There are plenty of great spots throughout the park, and as the sun was setting we headed towards Albert Bridge. Katy and Tim were great to work with, fun loving, have a sense of adventure and were keen to go with my ideas and totally got “in the zone” for their Battersea Park engagement shoot.

Here are some of my favourites from their shoot: